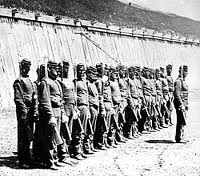 Replacements are used to return elements to full strength which are missing hits--as per the element detail window--and to replace entire elements missing from units (as opposed to Reinforcements which are entirely new forces built or brought in from elsewhere).

The player purchases replacement chits in the War Production tab of the Ledger.  The player can choose to automate replacement purchases in the Settings->Game screen.  Scripted events can add replacements either directly or to the pool for later purchase.

If an injured unit (partially red in the element box) is stationary it will access available replacements to recover hits.  For each hit a replacement chit attempts to restore, there is a chance that the chit is consumed.  Therefore the number of hits each chit can replace is variable from turn to turn but will conform to the average when taken over the course of the game.  Logically, since a full element consumes a full supply chit, the number of hits a chit will replace averages to the number of hits a full-strength element would have. Visually, an element that is 50% red requires on average 50% of a replacement chit to regain full strength.

On the War Production screen the numbers below the NATO symbols indicate how many chits already exist.  The number in parentheses indicates how many you have purchased this turn.  Click the NATO symbol to purchase a replacement, right click to remove one from your purchase. (You cannot "sell" an already existing chit).  The number above the unit symbol represents the total number of hits that need replacing for each type; this is different from AACW.  Exclamation points or a red font indicate that the engine thinks more replacements are needed. Hovering over the NATO symbol shows the cost as well as the number of replacements available for purchase.  Replacement chits are added on Day 0 of the ensuing turn, and can be drawn on during that turn.

To estimate how many replacement chits are needed, divide the number above the NATO symbol by the number of hits in the average element. The chits displayed in the War Production screen are fully available, none has been partially consumed.  Commonly purchased replacement types:

Elements draw replacement hits at a rate determined by posture and the structures in the region up to 20% of the element's maximum strength per turn for the CSA and 10% for USA.  Units set to passive posture recover hits more quickly.  Depots, forts and cities also increase replacement rate.  Depots allow hit recovery at the fastest speed availiable no matter the posture.  Naval units must be in size 3+ harbors and set to passive posture to recover hits.

Replacement chits can also replace destroyed elements.  Each element restored in this way will consume an entire chit.  Depending on settings, this may only occur in depots.  If there are not enough chits available, units in passive posture and inside a structure take priority.  Many units start with missing elements (indicated by a white chevron along the left edge of the unit's picture in the unit box).  These elements will be added to the unit as per the rules above, and will be paid for with purchased replacement chits.

Most players find that in the early turns of the war replacement chits are more important than new units.  The game usually begins with considerable fighting in Virginia, and many units start with missing elements, so replacement chits are needed early.  New units take several turns to build and must then be moved to the front whereas units drawing replacements have them available on the following turn, so materiel entering the game through replacement is combat-available sooner and in better position.  Understrength elements are prone to breaking in combat and are at greater risk of outright elimination, so hits taken in combat should be replaced quickly.

"Volunteer Brigades" are often missing Light Infantry elements at start, but new players often do not realize this is the chit that is needed.  Many players recommend forgoing expensive chits like heavy artillery or supply in the early going to save money.  The red bar on the map-sprite indicates whether the force is missing elements, the red bar on the stack-window sprite indicates a unit needs to recover hits.

Retrieved from "https://cw2.fandom.com/wiki/Replacements?oldid=4196"
Community content is available under CC-BY-SA unless otherwise noted.